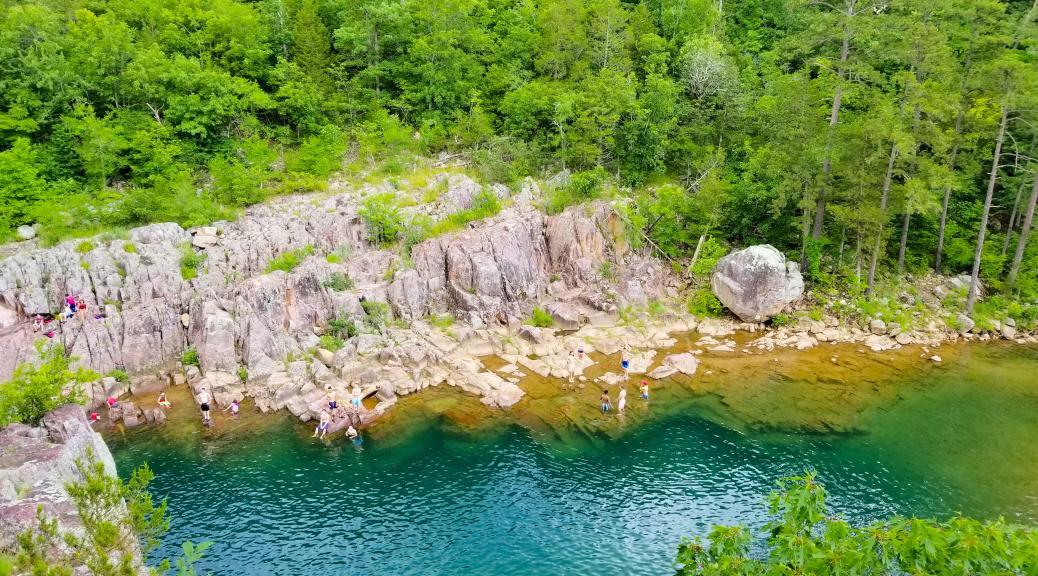 Johnson’s Shut-Ins State Park is nestled in the St. Francois Mountains of eastern Missouri and nearby to the Taum Sauk Mountain which is the highest point in Missouri – a whopping 1,772 feet above sea level! The Shut-Ins is a type of rock formation found in streams where they carve through a mountain range, creating rivulets, rapids and plunge pools. These rock formations resist erosion and are confined to a narrow valley or canyon, with the river valley widening out both above and below. The Johnson’s Shut-In has clear, cool water, deep pools throughout with many waterfalls as the water works its way thru the rocks and a large deep pool area at the end. The river is unnavigable, even by canoe, due to the rapids and narrow channels. It was another rainy day as we walked the trail around the shut-in and watched brave people jumping into the deep pools of water from the high rocks surrounding the river. Even though the water was so clear they were a lot braver than us! The Ozarks are simply beautiful and we were anxious to see more. The trail continued straight up the side of the mountain but because of the very slippery mud we turned around and decided to play it safe stay on the lower trail along the river.

The reason we ended up at Johnson’s Shut-Ins was because of Jan and Chris, Jerry’s sister and hubby. We were supposed to camp with them here as they were about to begin their full-time RV life. Unfortunately, their fifth wheel was destroyed in the recent tornado in Jefferson City. Thank goodness they were still in their home and not living in the RV yet so they are not hurt. However, they have faced the worst, shown remarkable strength by moving forward with their plans and have already purchased another RV! We are so thankful for them and their lesson in grace, strength and fortitude. We were not able to camp together (YET!) but they came for the day and brought huge steaks! Needless to say, we had a wonderful lunch and a great visit! 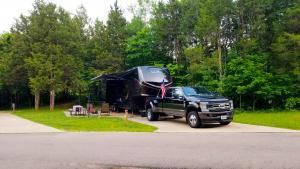 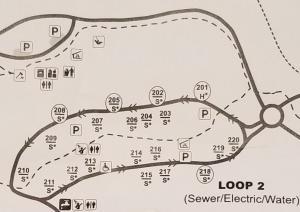 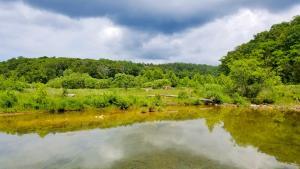 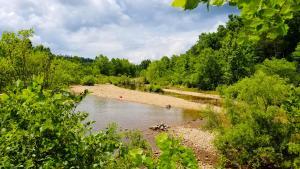 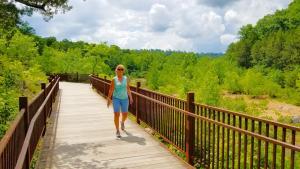 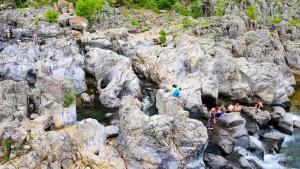 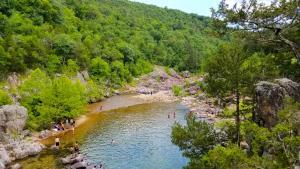 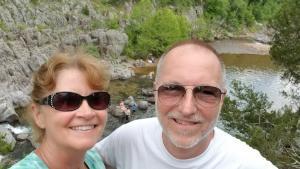 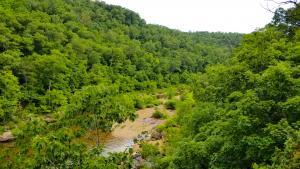 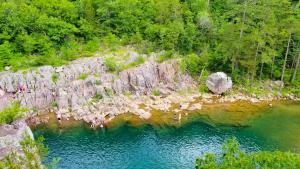 Rating: ⭐⭐⭐⭐
Site Quality:  Asphalt roads and concrete pads.
Type:  State Park
Access: We came up to the park from the south from US-60 via MO-21 which is somewhat narrow and hilly particularly as you get further north and closer to the park.
Staff: The staff were friendly and helpful. They frequently patrolled the park but did not seem overly picky about things.
Amenities:  50A power with full hookups. Each site had a picnic table, lantern holder and a fire ring. There were restroom/shower facilities that seemed to be modern and clean. Large laundromat and campground store.
Cellular/WiFi:  Verizon was nonexistent but we did have very slow (1-2 Mbps) AT&T service with amplification.
What we liked: Lots of opportunities for hiking. Relatively new campground so everything was in good shape and the sites were spacious. The shut-ins area offered good places to swim.
What we didn’t like: Due to trees we weren’t able to get satellite TV but the shade helped keep down temperatures so it was kind of a wash. They otherwise created a beautiful sight out our windows. Ticks were a big problem and we both had one or two become attached to us. 🙁 We never were able to create an account on the Missouri park site to make reservations. That could be a problem next time we want to stay in a Missouri State Park.
Verdict: This was our first time to stay in a Missouri State Park and we really enjoyed it. Loop 2 was the only full hookup area but any of the sites there big enough for us would be good, particularly on the north side of the loop. The pull through sites on the north side of the loop were some of the largest we have seen and they would be great for us if we return.