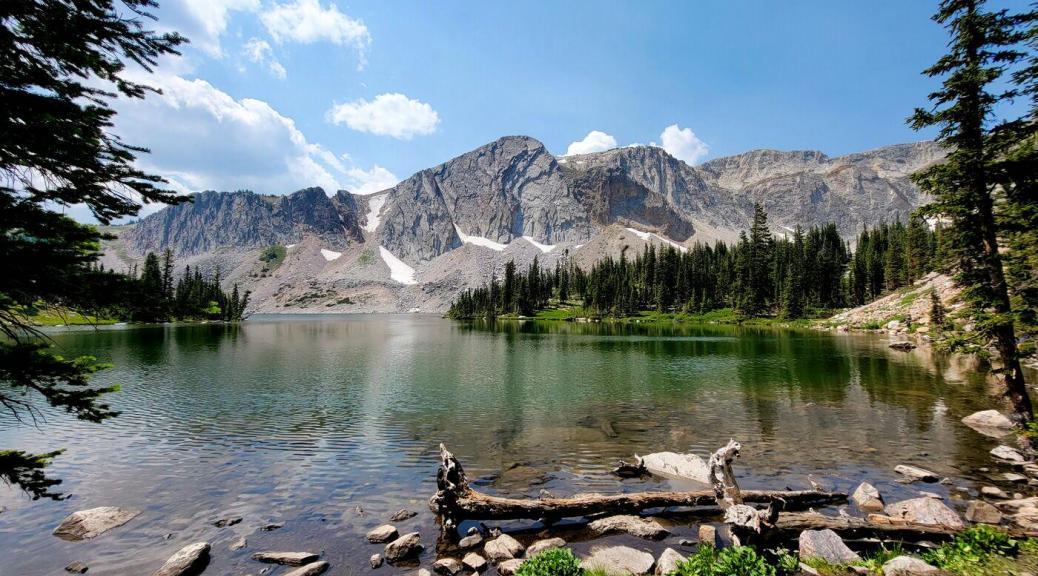 We stopped in Laramie for four days as we headed further west and north this summer. We didn’t have a lot of expectations before arriving as the area is mostly in the plains and it is a bit dusty and desolate. As we would soon see however, there is a lot of frontier history here as well as some gorgeous scenery not far from town.

Our first excursion was to the Wyoming Territorial Prison less than a mile from our park. While in operation, the prison housed more than 1000 outlaws including the notorious Butch Cassidy. The building itself is one of Wyoming’s oldest stone buildings. Built in 1872, the site served as a federal and state prison until 1903 when a new penitentiary was built in Rawlins about 100 miles west of Laramie. At that time, the University of Wyoming was given the prison grounds to be repurposed as an experiment station for the College of Agriculture. In 1991, the site was opened to the public as a historic museum. 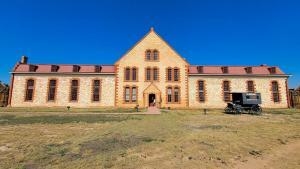 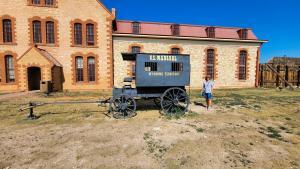 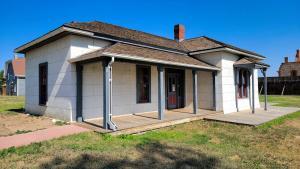 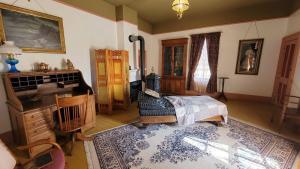 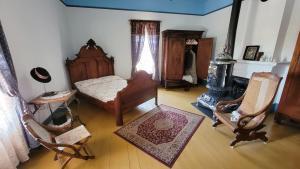 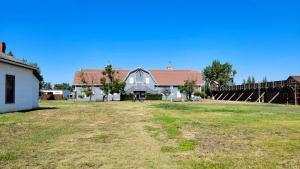 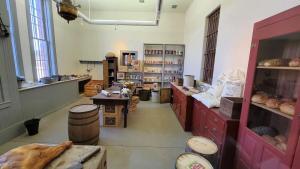 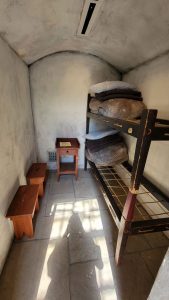 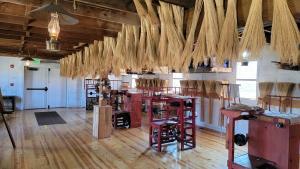 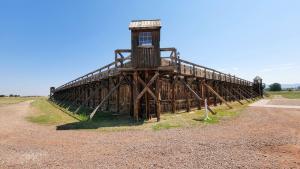 The Overland Trail passed through the Laramie area running roughly parallel to Interstate 80 today. The Overland Trail was famously used by the Overland Stage Company owned by Ben Holladay to run mail and passengers to Salt Lake City, Utah, via stagecoaches in the 1860’s.

We took a day trip along the Snowy Mountain Scenic Byway west of Laramie and enjoyed some gorgeous scenery. The byway is about 30 miles long and winds it’s way through the Snowy Mountain Range. The pictures below are some of the highlights of the trip. Notice there is still snow at and above the 10,000 foot level. The large area in one of the pictures is actually glacier ice. 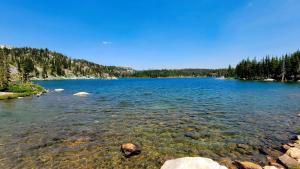 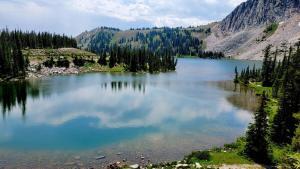 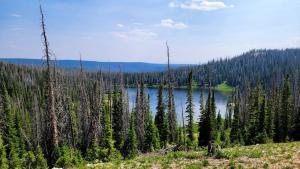 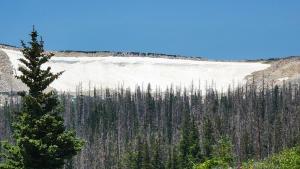 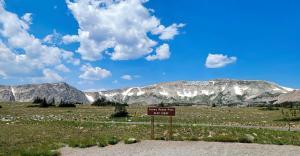 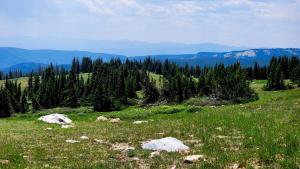 On a more somber note, we found out that on October 6’th 1955 an United Airlines flight 409 crashed into Medicine Bow Peak killing 66 people. At the time that was the worst aviation disaster in the US. The peak is to the right of where the road points to below. Reports are that the plane was 25 to 50 feet below the rim when it impacted the mountain. There was a lot of speculation as the the cause but one thing is sure, the airplane was about 30 miles south of where it should have been. 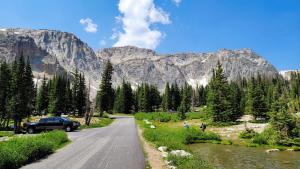 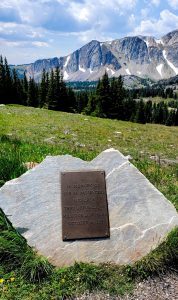 On the way to the Scenic Byway we stopped at the Nici Self Historical Museum in Centennial, WY. The museum is maintained by the Centennial Valley Historical Association and includes buildings and other artifacts from the early days of the area. 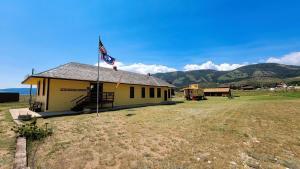 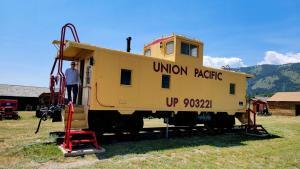 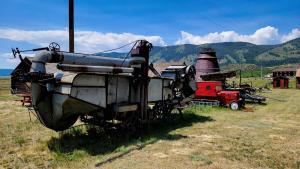 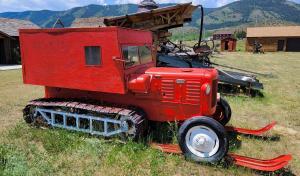 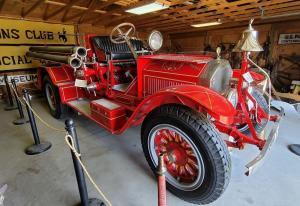 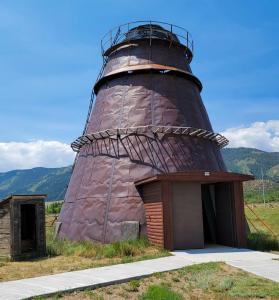 Rating: ⭐⭐⭐
Site Quality: Fire pits and picnic tables at each site.
Type: Commercial
Access: Easy access off I-80 (exit 310) on the west side of Laramie. The park is along the interstate but you have to take local roads to get to the entrance.
Staff: We had minimal interaction but check-in was smooth and efficient.
Amenities: Laundry, restrooms and showers. General Store onsite with RV supplies, and camping goods. Dog park as well as a playground for kids. On-Site Propane.
Cellular/Wi-Fi: Wi-Fi is available in the park although we didn’t use it. AT&T and Verizon were decent at about 6 Mbps.
Restaurants:
Nearby parks: We didn’t investigate other parks nearby but in researching our stay the KOA was the best option for a big rig. You do need to pay extra for one of the gravel sites on the north side of the park however.
What we liked: Convenient access, right along the I-80. We paid for a semi-premium site which was expensive but that gave us the length we needed as well as a wider site. It included seating around the fire pit as well. Premium sites had concrete patios. Even though there are major train tracks nearby there was minimal noise.
What we didn’t like: The newer sites on the north side of the park are the only real options for bigger rigs. The sites south of the office (toward I-80) were dirt and tightly packed. They may have been occupied by mostly permanent residents. Utilities were awkward except sewer. We had to park as far back on the site to have room to park the truck which barely fit. By doing so we had to use an extension cord to get power connected. Water in our site was also at the front of the site so we needed a long hose. Although we had pretty good spacing between sites, the placement of the utilities was deep into the area which brought neighboring hoses and power cords in what should have been free space. Note the water faucet near our picnic table and the power pedestal near the fire pit in the picture below.
Verdict: Good place for a night or a few if you’re in the area.