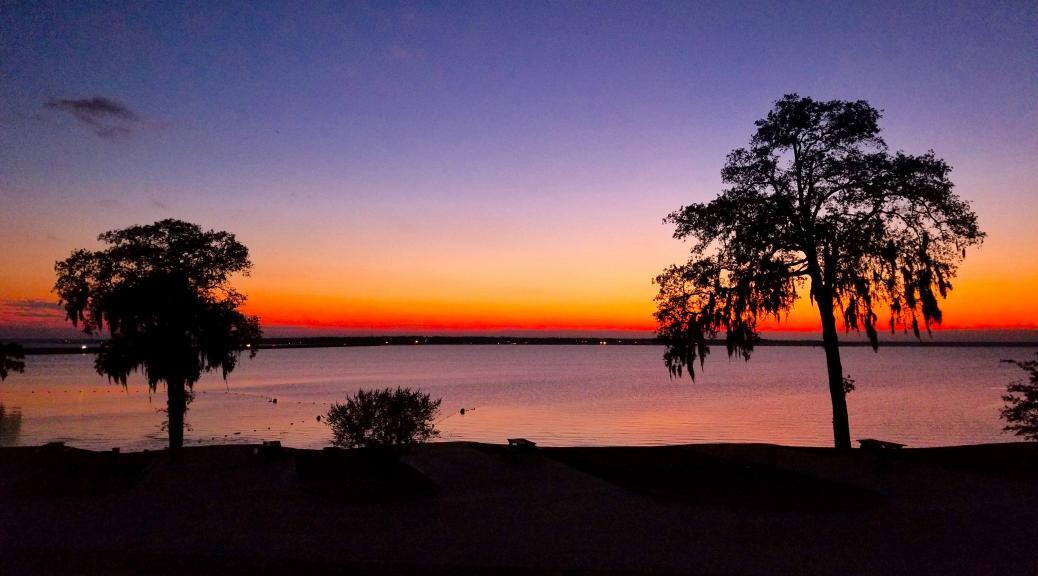 We stayed at the Lake Livingston / Onalaska KOA in late October of 2019 as we were heading back to the Round Rock Area from our tour of the Southeast. The first part of the stay we met up with good friends, Tammie and Peter, for three days with their new RV. The first two of those days, the weather didn’t cooperate. We woke up on the third to a gorgeous day. The sky was clear and it was warm enough to be comfortable but cool enough at night to have a campfire while sitting outside and watching the World Series game 5, Houston Astros beat the Washington Nationals. It was a great four days with them relaxing, catching up, and making new memories. Peter is a great cook and made dinner twice! So glad we can look forward to camping with them in the future.

END_OF_DOCUMENT_TOKEN_TO_BE_REPLACED

We stayed here for 4 days in May 2019 so we could visit family and friends in the area. It had been more than 26 years since we had lived nearby and needless to say the growth in the area had made it virtually unrecognizable from when we were in The Colony in our first house.

END_OF_DOCUMENT_TOKEN_TO_BE_REPLACED 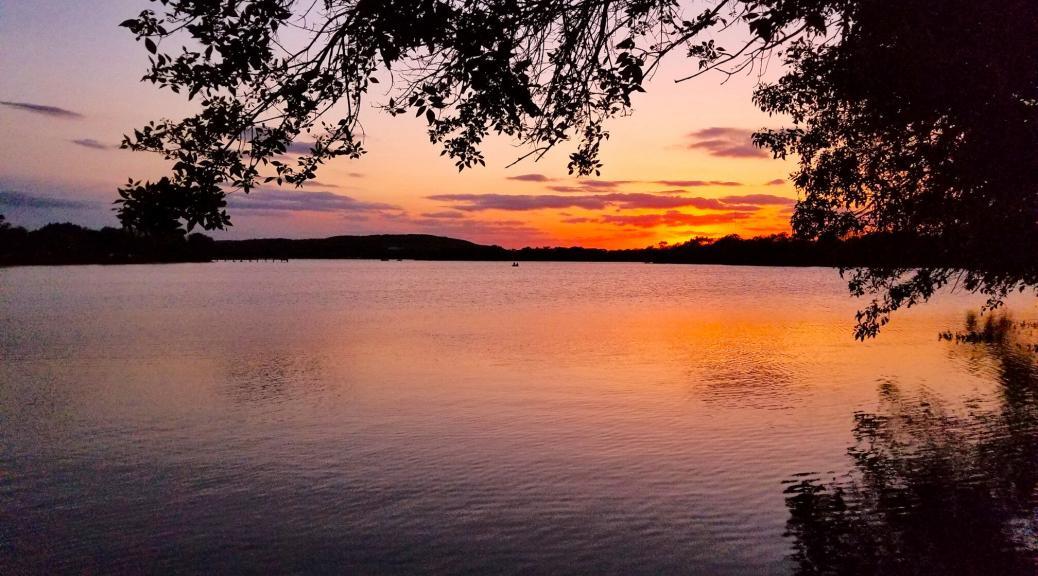 We stayed at Inks Lake State Park for 5 days in April 2019 on our way back towards the Round Rock area for our bi-annual visit. This was a great time of year for our visit as the wildflowers were beautiful and an evening campfire was great for the cool evenings. Inks Lake has always been a favorite park in this area although we never came here much when we lived close by. During the peak season this park stays very busy and closes entry to additional people during the day when the park reaches capacity.

END_OF_DOCUMENT_TOKEN_TO_BE_REPLACED 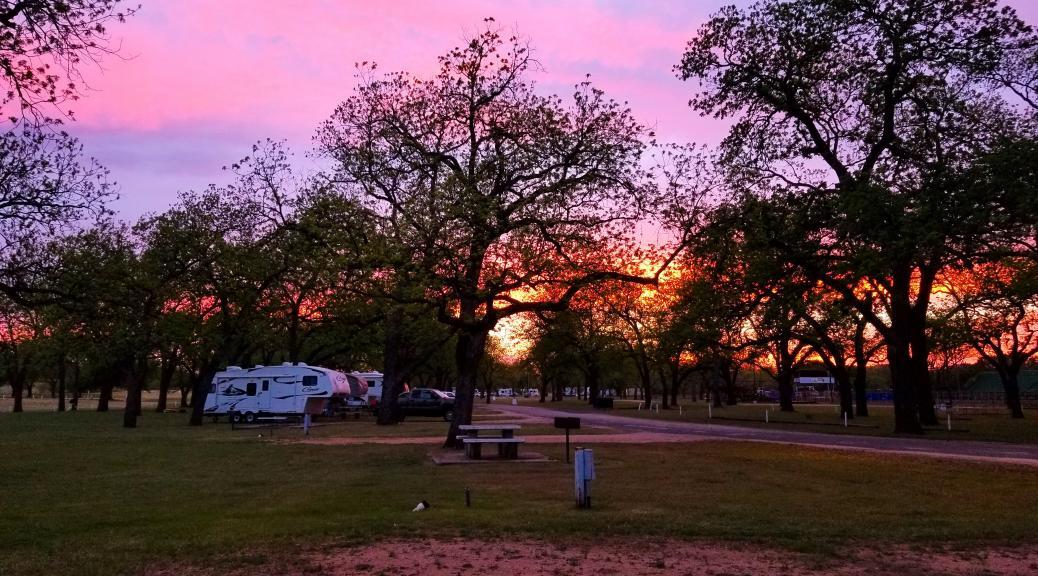 Rating: ⭐⭐⭐1/2
Site Quality:  Asphalt roads and pads. Most sites are back in but there are a few pull throughs. The park was clean and well kept.
Type:  City Park
Access: Easy access from Highway 87 on the south side of Mason, TX.
Staff: I talked to the camp host a couple of months before our stay and everything was as planned when we arrived. Once there, we never saw the hosts. We paid at the pay box and that was the only interaction.
Amenities:  50A power with full hookups. Restrooms and showers seemed fairly clean but maybe a bit dated. There was also an on site laundry facility that looked good although we didn’t use it. There is also a dump station and playground. Short hiking trail – maybe 1/2 mile long.
Cellular/WiFi: AT&T was decent with amplification. Verizon was intermittent and weak. This whole are of Texas is a dead zone for Verizon. Most of the time phone calls would work particularly if you were near the amplifier.
What we liked: Our site (#1) had good shade from the Pecan tree grove in the park. We were also able to receive satellite once we moved the trailer over to clear the trees in spite of about 1/2 tree cover. We liked the nature trail and other places to walk around the park. Great rate – $30 per night for the daily rate but weekly is even less. We averaged about $26 per night.
What we didn’t like: This is a city park with a rodeo arena, 4 baseball fields, soccer fields, a football stadium, golf course, playground, and community center. It stayed busy nearly every day. Roads in front of the sites were rough and 20 MPH in spite of having a playground there and many people probably went twice the speed limit. There was a lot of daily traffic. Cellular connectivity was marginal. On the first day we were hit with an errant golf ball in spite of being pretty far from the tee.
Verdict: There is a lot to like about this park and we would stay here again. Sites 12 through 29 might be better as far as the traffic goes but they are a bit closer together and might be small for a big rig. We deducted 1/2 star because of the traffic. 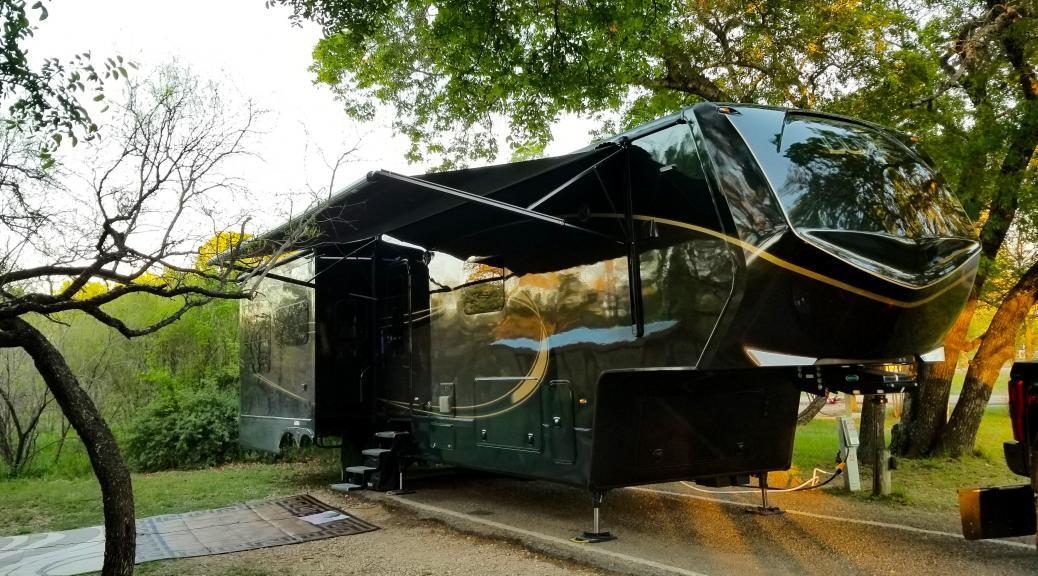 Rating: ⭐⭐⭐⭐
Site Quality:  Asphalt roads and pads. All sites are back in. The park was clean and well kept, however a large flood went through the area about six months ago and there is a lot of flood debris along the river.
Type:  State Park
Access: Easy access from U.S. Highway 377 on the south side of Junction, TX.
Staff: The staff fixed an issue with our original reservation that caused us to be overcharged by $60 before we could even ask. ther staff we interacted with were friendly and helpful.
Amenities:  30A power and water only, no sewer. Bird blinds and hiking and biking trails, clean restrooms and showers.
Cellular/WiFi: AT&T was decent with amplification. Verizon was intermittent at best. Most of the time phone calls were impossible.
What we liked: Our site (#33) had plenty of shade so even at 96 degrees we were able to stay comfortable running just one AC unit (due to 30A power). We were also able to receive satellite from site 33 in spite of probably 2/3 tree cover. Nice trails; wildlife – birds, deer, turkeys, armadillos; quiet park. It was a relatively small State Park compared to others we have camped at.
What we didn’t like: Only 30A power available. Not a lot of long spots. Our site was advertised as 55 feet but that included being able to hang over the back of the pad, actual pad was only 50 feet which made it a bit small for us even hanging over. We had to lower the tailgate on the truck and bac up right to the trailer to park on the pad correctly. They do not allow parking off the pad. In April, trees (Elms?) were dropping green pollen pods which were a pain. Flood damage from a large flood 6 months ago.
Verdict: Site 33 was large with plenty of shade and could easily be the best site for us overall. We would stay at this park again.