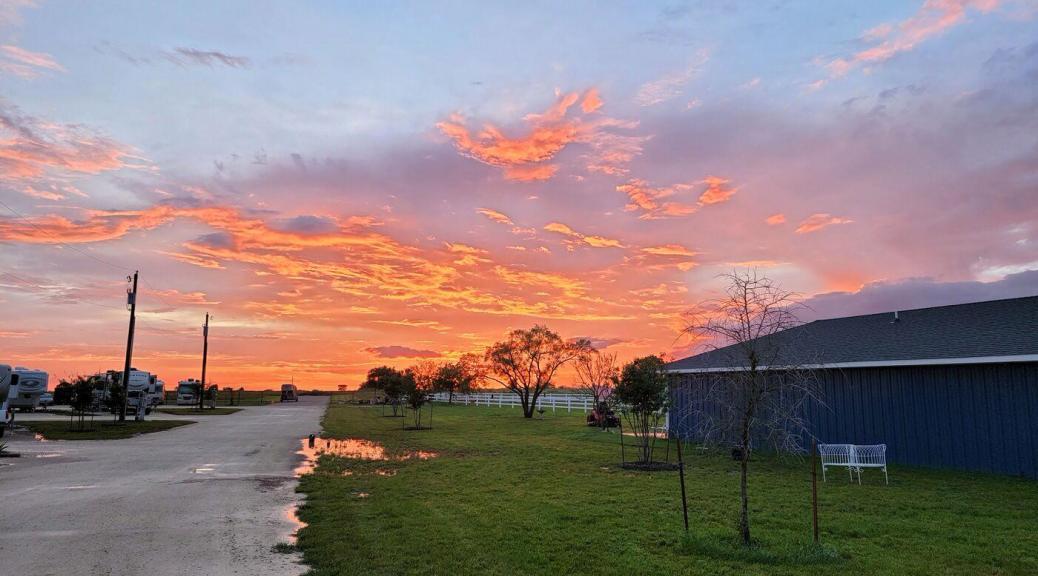 Rating: ⭐⭐⭐1/2
Site Quality: Gravel roads and pads. Due to recent rains we sunk about 4″ into the pad while parking. All connections were conveniently located for our rig.
Type: Commercial
Access: Easy access off US-377 on FM 219 (W. Clinton St.) on the west side of Dublin.
Staff: Very accommodating, friendly and helpful. Provided a lot of information about the local area, places to go and things to do. Allowed us to stay until 1:00 PM to depart. They are some of the friendliest and most accommodating hosts we have ever encountered, even returning home early after eating out to be sure they were able to say goodbye before we left.
Amenities: Laundry, restrooms and showers.
Cellular/Wi-Fi: Verizon was almost non-existent and AT&T was somewhat slow at about 8 Mbps. There was Wi-Fi in the park but we didn’t use it.
Restaurants: There were a few options in Dublin although we didn’t try them. We did go to Hard 8 BBQ in Stephenville, a place we had flown in to often for a so called $100 hamburger.
Nearby parks: We didn’t investigate other parks in the area as we were only there for one night. We had tried several parks in the Stephenville area however before staying here and most did not even call back. The staff at this park was definitely much more welcoming.
What we liked: Very friendly and helpful staff.
What we didn’t like: Gravel pads and roads are not the best option during the rainy season. No trees so it could be a bit hot in the summer but otherwise provides for good satellite TV coverage.
Verdict: The owners are very friendly and helpful and really make you feel welcome. Definitely a good place for a short stay in the Dublin / Stephenville area. There are a couple of museums in Dublin that we’d like to go through as well as Hard Eight BBQ in Stephenville that’s been a favorite since we used to fly in there. 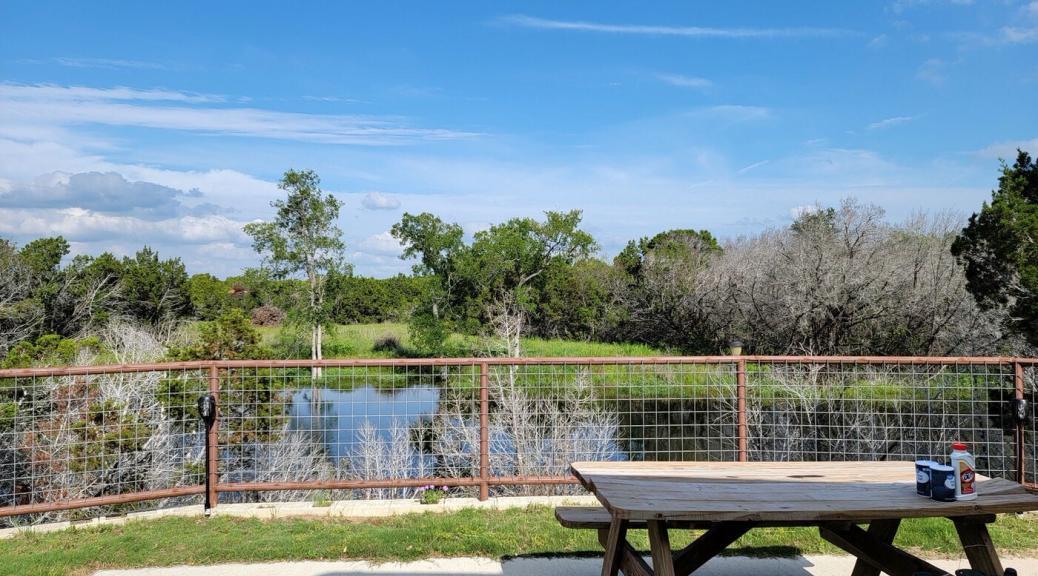 Rating: ⭐⭐⭐1/2
Site Quality: Gravel roads and pads. Many sites have a concrete porch with a picnic table and some have additional wood decks. We were on site 2 and it had both a porch and a small wooden deck. Sites 1, 2 and 3 are all on the small lake (pond) created on Little Lucy creek and those along with the back-in sites along the creek are the best sites.. In our opinion, site 2 is the best in the park. It is a long pull-thru with a side yard facing the lake that is almost as long as the site.
Type: Commercial
Access: Easy access off US-281 just north of Lampasas. There is a large sign at the southern entrance but that is the exit from the park. The actual entrance is a bit further north and has a sign over the entrance road that’s a bit harder to see from the road. This entrance is about 1 mile north of the northern end of the runway at the Lampasas airport.
Staff: We had minimal interaction except when setting up our reservation several months ahead of time. It was all done with Trent, who I believe runs the park, and everything was just as we expected when we arrived.
Amenities: There is a playground as well as laundry facilities that include restrooms/showers. Construction was underway for many new sites as well as another laundry facility. I wouldn’t call this a resort yet but maybe once they finish out the remaining sites it will be closer. This will be a very large park once complete.
Cellular/Wi-Fi: AT&T was decent at about 16.7 Mbps but Verizon was all but non-existent. Wi-Fi was not available in the park.
Restaurants: Storm’s Drive-In is a well known hamburger restaurant dating back to 1944. The burgers were just ok but the fries were really lacking. We’ll probably try one of several other hamburger places in the area next time. Mimo’s Mexican had decent Mexican food in a strip center next to Tractor Supply. Alfredo’s Mexican I liked it a lot but Anna’s chicken enchiladas were just so so.
Nearby parks: We didn’t really investigate other parks in the area but we did pass by a few. If we are in the area again we should check out Boone RV Park on 281 on the south side of town. That area has a nice park and was very pretty although the parks could be smaller and have smaller sites. There is also the Buena Vista Wildlife Safari and RV Park north of here in Evant that might be interesting. The only issue there is that it is farther from any larger grocery stores.
What we liked: Lots of space between sites. The park was well maintained. Quiet, country setting.
What we didn’t like: No Verizon service. We had data from AT&T but phone calls were intermittent based on being able to connect to a nearly non-existent Verizon signal. We were there in the rainy season and the gravel roads, although well packed and not particularly muddy, did track dirt into the RV and splashed mud onto the outside. There is a fair amount of road noise from US-281, a bit more than I would expect given our distance from the road, although generally not enough to keep us awake at night. There is also a train track about 1/2 mile away but fortunately they do not cross any roads where they need to sound their horn so the noise is fairly minimal.
Verdict:
I could easily give Little Lucy 4 stars if the roads and sites were asphalt and/or concrete. That said, we would still return to Little Lucy and the Lampasas area again whenever we want to stay in the area. Little Lucy was a great country park to get away and enjoy some peace and quiet. 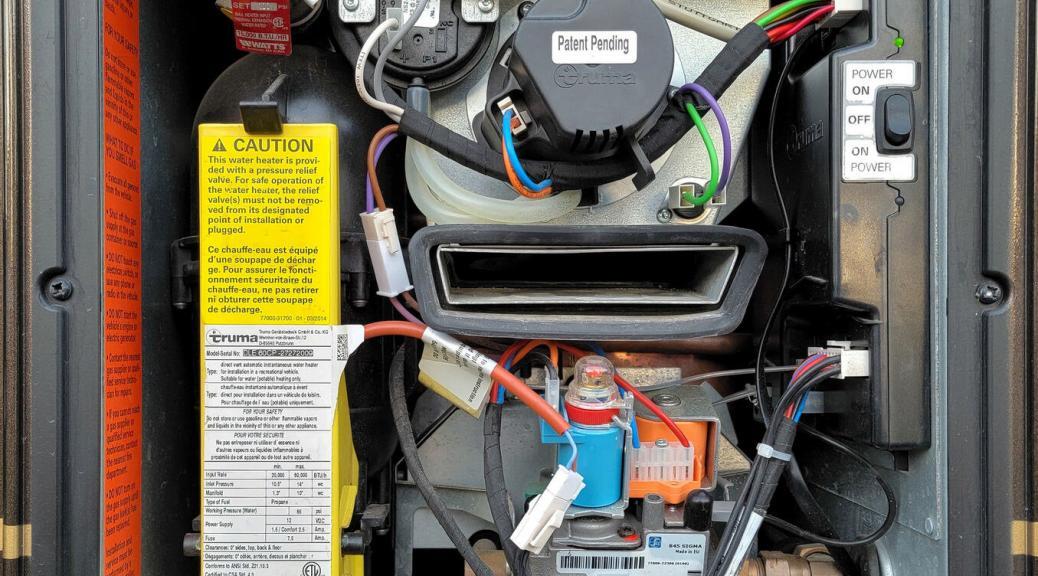 Let me say up front, I’m not an expert on RV water heaters. 99% of my experience is based on using our Truma AquaGo Comfort Plus system while living and travelling full time in our RV for the past 3 years. We mostly stay in parks with full hookups but do stay in parks without sewer several times a year. We rarely dry camp. How we camp definitely affects our attitudes toward tankless. The Truma AquaGo systems are arguably some of the best you can buy and the Comfort Plus model is the best of the best, but they are also some of the most expensive. For this post I’m talking mostly about hot water for fifth wheels and travel trailers. Large class A rigs may have other options (Oasis and Aqua Hot for instance) including those that run on Diesel or other fuels that are beyond the scope here.

Recently there have been a lot of questions on RVillage and Facebook about tankless water systems and whether someone should upgrade. Everyone has their opinion and there is both good information and bad that people share. To write this post, I’ve tried to capture a lot of the feedback other RVers have shared along with some information from the manufacturers and of course my own preferences and opinions. Hopefully, you will find this information helpful but I warn you – I’m biased based on how we use our RV and the heater we have. We love our Truma system!

END_OF_DOCUMENT_TOKEN_TO_BE_REPLACED 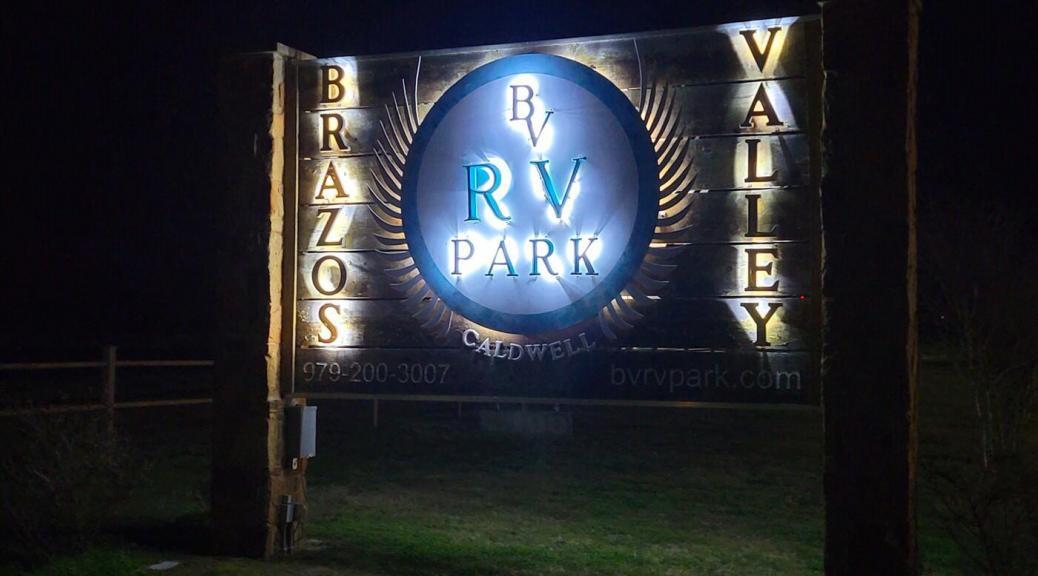 One of the criteria we had when looking for places to stay this winter in Texas was that they needed to be close to shopping, particularly Walmart, and medical services so that we could get COVID vaccinations when available or other medical care if needed. We found it difficult to get into a State Park for more than a few days at a time and in particular weekends were pretty much fully booked. We found Brazos Valley and it offered a small Walmart and a Brookshire’s grocery in nearby Caldwell as well as Walmart Supercenters, restaurants and numerous other stores in nearby Bryan and College Station. We thought surely we could find enough things to do in the area to stay busy for a month so we booked our stay without knowing quite what to expect. To our surprise we really liked the park and the area.

END_OF_DOCUMENT_TOKEN_TO_BE_REPLACED 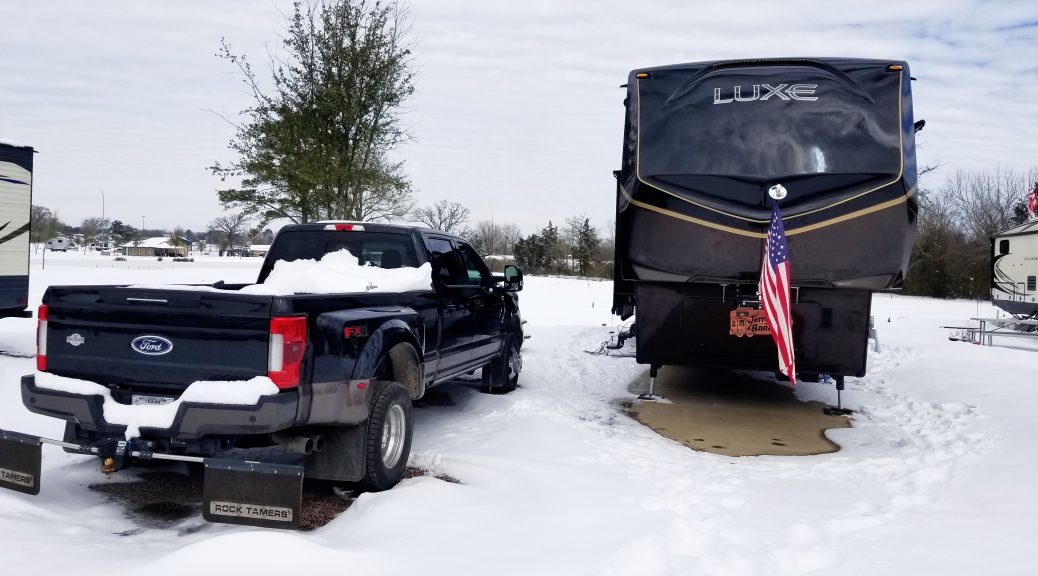 We spent two months (January and February 2021) at Tyler Oaks RV Resort north west of Tyler. We originally planned to go back to New Mexico for the winter but due to COVID and continued lockdowns there that were causing long lines just to get in a grocery store we decided to go back to Texas where we would have better medical care due to our insurance. We thought it might be easier to get vaccinations (which I was able to do but not Anna quite yet) and also that it would be warmer. Well, we should have known better about that one. Even as we left Colorado there was snow ahead of us going through Texas.